Waiting on Wednesday Pick- John Green has a new book coming out!!!!! "Waiting On" Wednesday is a weekly event,
hosted at Breaking the Spine,
that spotlights upcoming releases
that we're eagerly anticipating.
This week's pre-publication "can't-wait-to-read" selection is:
The Fault in Our Stars
by John Green 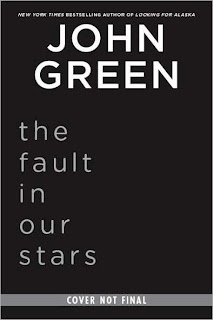