Mamma Mia! The Movie
I have never seen the Broadway version of this but rest assured that I plan to see it before I die! I absolutely loved this movie and was singing some of the songs right along with the characters!! What a fun story and the way they took those ABBA songs and built a story from them was incredible. The location of the movie was to die for...how I long to stay at the inn and swim in those blue/green waters!! I thought everyone did a great job of singing and yes, I'll admit that there were a few cheesy moments, but I didn't care. I cried some, laughed some, and did a lot of dancing!!! Now I want to download a bunch of ABBA songs to my iPod!!!
My Rating; 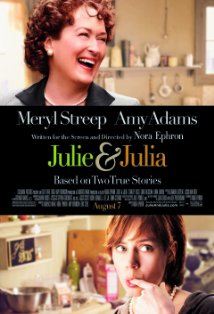 Julie and Julia
It's no secret that I hated the book that Julie Powell wrote and frankly, I disliked Julie Powell immensely. The only reason I wanted to watch this movie was to see Meryl Streep bring Julia Child to life and she did not let me down!! Boy, did the movie producers sugarcoat Julie Powell in this movie...she's fairly nice, doesn't drop the F-bomb in every sentence, and it didn't hurt that they chose Amy Adams as Powell (she's someone most people like). I would like to see a movie based on Julia Child's book with Meryl Streep, now that is a movie I would see in the theater!! Meryl Streep makes this movie and I enjoyed it just for her portrayal of the fascinating Julia.  Overall, not a bad way to spend 2 hours!!
My Rating: