I'll read what I want, when I want, and without labels...Thank you! 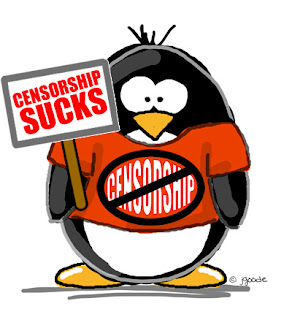 Photo link
Censorship in any form really makes me angry and when I read this article today I was incensed. I understand a parent who doesn't want their child to read certain books and/or not be able to check them out from a school library. I've had several parents call me to make sure that I put notes on their child's library account so that a flag comes up that reminds me not to allow them to check out "Harry Potter" or "Fear Street by R.L. Stine." I follow their requests because they're the parents after all...doesn't mean though that other kids can't check them out. I also do not label books in any fashion. No stickers for holidays, historical fiction, comedy, etc. Why? Because I think kids need to learn how to use the library catalog and search for books under keywords, subjects, author name. And I think they need to browse and pull books out and spend a few minutes with it to see if it might be one that they will enjoy. Heck, I quit putting those annoying "Accelerated Reader" sticker on the spines. Because frankly, I despise AR!!! But that's a whole 'nother post!! Let me get back to the issue, which is censorship. The issue here is that this parent wants the PUBLIC library to label all YA books so that kids know what they're getting before they open it. This parent wants the "naughty" books put somewhere else. This parent wants to tell YOU and YOUR child what is acceptable to read....what do you think about that?

Here is the article, read it and tell me what you think?

Dixie Fechtel wants to know the kinds of books her daughters check out of the local public library’s YA section. That’s why the Leesburg, FL, mom of two is pushing for labels on any book aimed at teens containing material that refer to illegal acts or what she calls “inappropriate.” “We’re not trying to ban books,” she says. “We just want kids to know what they’re getting into.
Fechtel’s fight has been a long one, starting in 2008 when she pushed for the Leesburg branch of the Lake County Library System (LCLS) to label books she felt had content unsuitable for teens. Back then, the library placed stickers that read "High School" on some books and reshelved them outside the teen reading room. But Fechtel says that’s not enough. She wants labels that delineate the content more clearly—and she wants them on books throughout Lake County. But Library Services Director for LCLS, Tom Merchant, who sat with Fechtel during her first round of requests, says she has not made any formal appeal this time through the library system.“Nor has she contacted me or anyone else directly associated with the library system,” says Merchant.Fechtel doesn’t argue that point, and instead has taken her cause directly to Lake County Board of County Commissioners, hoping to make inroads with them. She says two of them, Linda Stewart and Jimmy Conner, are both very concerned about the lack of labeling on books. Repeated calls to all five commissioners, including Conner and Stewart, the latter of whom serves as liaison to the Lake County Library System, were not returned. Fechtel has also enlisted the help of the Liberty Counsel, a self-described nonprofit ministry that provides free legal aid in “the areas of religious liberty, the sanctity of human life and the family,” according to its Web site. Through the group, Fechtel says she has provided commissioners with legal wording that could be attached to a library’s collection and development policy stating that materials mentioning illegal activities among minors shouldn’t be housed in a library.But why hasn’t Fechtel approached the Lake County Library System or the library itself?
“Been there, done that,” she says. “The system they have in place, probably dictated by the American Library Association, is not meant to accomplish anything for parents and citizens. It’s meant to wear you out.”
Merchant says that if Fechtel were to come in, he would tell her about the library’s reconsideration process. And he adds that industry-imposed labels do exist on DVDs and CDs in the library, but they still don’t affect where librarians might actually place those materials.
“Our policy clearly states that it’s a parent’s responsibility to review what their child is checking out,” he says. “It’s not our role to impose one group of parents’ idea on all children in the library.”