Saturday Snapshot
is hosted by Alyce of At Home With Books
It's easy to participate- just post a picture that was taken by
you, a friend, or a family member, and add your link
on Alyce's site. (no pictures from the internet!) 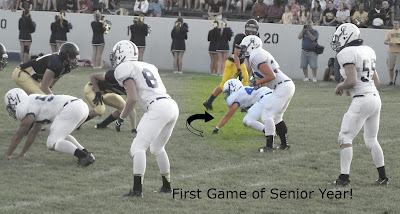 Marc is in the middle of the picture and is the highlighted player. He is down on the line and you can see his left arm on the field and a hint of the #4..... plus, the arrow is pointing to him!! :D

August 23rd started the football season for Marc and for the craziness of it to invade our home! This is his Senior year and I must admit that it is very bittersweet already. For over six years I have been his biggest fan and watched him grow not only as an athlete, but also as a leader on the field. He's always risen to the challenges that the coaches give him and quite honestly has made his position on the field his own. For those that don't know much about football (me included) he plays Nose on the defensive line. Usually the offensive player right across from him is one of the biggest guys on the team. Marc is only 5'8" and weighs 155 pounds. So he never outweighs his opponent, but what he brings is his speed and smarts to the position! Last night was their fourth game and Marc keeps adding to his stats of QB sacks, QB pressures, and tackles. He's fun to watch and I'm pretty proud of him, on and off the field!!