'Wherever You Go' by Joan Leegant (TLC Tour Book) 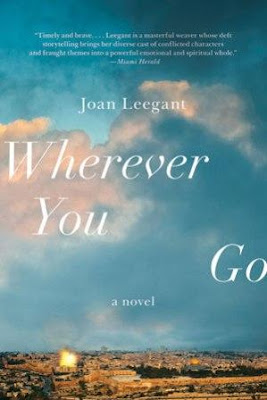 Teaser Synopis:
In a sweeping, beautifully written story, Joan Leegant weaves together three lives caught in the grip of a volatile and demanding faith. Emotionally wrenching and unmistakably timely, Wherever You Go shines a light on one of the most disturbing elements in Israeli society: Jewish extremist groups and their threat to the modern, democratic state. This is a stunningly prescient novel.

"He turned back to the terrible bed. It looked like the bed of a prisoner, the brutal metal frame, the cheap narrow mattress. He straightened the sheets, smoothed the thin blanket, tried to fluff up the sorrowful pillow, making it up as best he could so that if she ever came back, she would know that someone had been there who had loved her and cared for her and hoped that she would be all right."
p. 154

This is the type of writing where I can really lose myself in the story and never want to come up for air. I was truly amazed at how much this story impacted me because it's a quiet story with two out of the three main characters who are quiet people. The author took me into Israel...an Israel that I have never really seen ,nor ever experienced quite like this. I feel that this is a timely book in regards  to the current hostilities that Israel has been facing and though it doesn't go into detail regarding the problems with the Palestinians, it does give you a few glimpses into the lives of the Jewish people that live there. Some are strictly religious and follow the Talmud without question, while others are just happy to try to co-exist with their Arab neighbors. I liked the way the author had the characters lives intersect and what happened after that one fateful event!

After reading this paragraph I had to stop and really mull it over for a while...

The muezzin was finishing his chant. First to the east, then to the west, then north and south. It seemed to Yona to be a live human voice, though she'd heard they were often recordings now. In some cities, the honor used to go to a man who was blind so that when he ascended the minaret to sing out his cries, he wouldn't be able to see into the courtyard of his fellow citizens and violate their privacy.
But listening now--Allah u Akbar! Allah u Akbar! God is great! God is great!--Yona wondered if perhaps only a blind man could bear to do it. If maybe all calls to the faithful, of all religions, were made by those who were blind. The trumpet charge to the Crusades, the whipped-up cries for jihad, the pumped-up settler rallies in Zion Square refusing to withdraw, to Never forgive! Never forget! Because that way they would never have to see what it was they were calling for.

Recommend? Yes, without hesitation. This is a book that will draw you in slowly and has a certain rhythm to it...hard to explain exactly, but I was captivated by each character's story and how their choices and decisions would impact their happiness and the direction of their life.

Joan Leegant is also the author of a story collection, An Hour In Paradise, winner of the 2004 PEN/L.L. Winship Award for outstanding book by a New England author and the Edward Lewis Wallant Award, as well as a finalist for the National Jewish Book Award and selection for the Barnes & Noble Discover Great New Writers Series. Formerly a lawyer, for eight years she taught writing at Harvard University. The mother of two adult sons, she divides her time between Newton, Massachusetts and Tel Aviv, where she teaches at Bar-Ilan University. For more about Joan Leegant, visit:
www.joanleegant.com

Disclaimer:Thank you to TLC Book Tours for sending me a review copy. I was not compensated for my review. My thoughts on this book were in no way influenced by the author or publicist.They are my personal reflections based solely on MYexperience while reading this novel.


© 2011, Staci of Life in the Thumb. All Rights Reserved. If you reading this on a site other than, Life in the Thumb or Staci's feed, be aware that this post has been stolen and is used without permission.