'For the King's Favor'- Elizabeth Chadwick 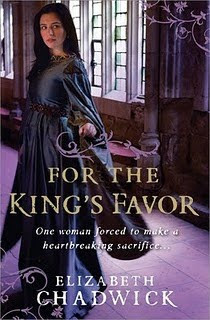 About: (From Sourcebooks)
Based on a true story never before told and impeccably researched, this is a testament to the power of sacrifice and the strength of love. When Roger Bigod, heir to the powerful earldom of Norfolk, arrives at court to settle an inheritance, he meets Ida de Tosney, young mistress to King Henry II. In Roger, Ida sees a chance for lasting love, but their decision to marry carries an agonizing price. It's a breathtaking novel of making choices, not giving up, and coping with the terrible shifting whims of the king.

Why I wanted to read this book:

Some interesting things that I learned:
What didn't work for me:
Recommend? Absolutely to lovers of royal Historical Fiction. I really enjoyed Chadwick's writing and can easily say that I would read another book by her. She has done an amazing job with her research. I think it would be fun to be her assistant!!

Published: September, 2010
Publisher:  Sourcebooks Landmark
Pages: 522 (Uncorrected ARC)
Genre:  Historical Fiction
ISBN: 99781402244490
© 2010, Staci of Life in the Thumb. All Rights Reserved. If you reading this on a site other than, Life in the Thumb or Staci's feed, be aware that this post has been stolen and is used without permission.