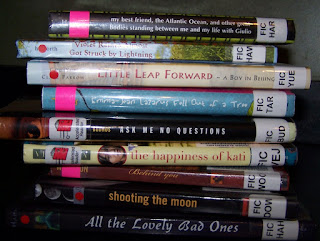 I decided to stick with YA and Children's books that I've been wanting to read for a while. Better yet I was able to pick them off of my library shelves. I wanted to stay with short, good reads so that I could feel like I accomplished something!!

Here's the list from the bottom to the top of my pile:

All The Lovely Bad Ones: A Ghost Story by Mary Downing Hahn
Summary: While spending the summer at their grandmother's Vermont inn, two prankster siblings awaken young ghosts from the inn's distant past who refuse to "rest in peace."

Shooting the Moon by Frances O'Roark Dowell
Summary: When her brother is sent to fight in Vietnam, twelve-year-old Jamie begins to reconsider the army world that she has grown up in.

Behind You by Jacqueline Woodson
Summary: After fifteen-year-old Jeremiah is mistakenly shot by police, the people who love him struggle to cope with their loss as they recall his life and death, unaware that Miah is watching over them.

The Happiness of Kati by Jane Vejjajiva
Summary: With the impending death of her mother, Kati, a young Thai girl, completes the puzzle of her past and discovers the reason why her mother gave her up as a baby.

Ask Me No Questions by Marina Budhos
Summary: Fourteen-year-old Nadira, her sister, and their parents leave Bangladesh for New York City, but the expiration of their visas and the events of September 11, 2001, bring frustration, sorrow, and terror for the whole family.

Emma-Jean Lazarus Fell Out of a Tree by Lauren Tarshis
Summary: A quirky and utterly logical seventh-grade girl named Emma-Jean Lazarus discovers some interesting results when she gets involved in the messy everyday problems of her peers.

Little Leap Forward: A Boy in Beijing by Guo Yue, Clare Farrow, and Helen Cann
Summary: In Communist China in 1966, eight-year-old Leap Forward leanrs about freedom while flying kites with his best friend, by trying to get a caged wild bird to sing, and through the music he is learning to play on a bamboo flute. Includes author's notes on his childhood in Beijing, life under Mao Zedong, and the Cultural Revolution.

Violet Raines Almost Got Struck by Lightning by Danette Haworth
Summary: In 1970s Florida, eleven-year-old Violet's world is upturned by the arrival of a girl from Detroit who seems bent on stealing Violet's best friends.

my best friend, the Atlantic Ocean, and other great bodies standing between me and my life with Giulio by Jane Harrington
Summary: As a class assignment, Delia keeps a journal and records her life and her fantasies about the Italian exchange student Giulio, who also happens to be Brady's boyfriend. And, oh, by the way, Brady is Delia's best friend.

I'm really excited to participate again and what a wonderful way to celebrate Dewey's love of reading and her love for the book blogging community!!