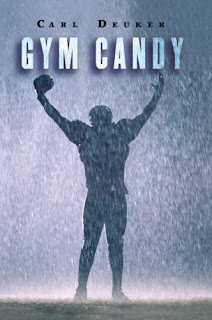 Gym Candy in short was a book that tackled the feelings that you have as a football player and the feelings that you have as a teen. I know, I'm both. Mick Johnson is a young running back for his high school team, the Shilshole Raiders. He has desire and talent, but the varsity coach refuses to play freshmen. At first he works hard through every practice and every drill and spends time in the weight room. After gaining the starting position from the junior year player Matt Dragger, they face a team that's just as good as them. In the final seconds of the game, the fate of the team is put in Mick's hands. Five yards from the end zone, the ball is snapped and Mick's best friend and quarterback pitches him the ball. He falls short two inches from the endzone. Torn up from the loss to Foothill, the other team, Mick spends even more time in the weight room. His dad later introduces him to a real gym called Popeye's. This is where his life slowly falls off track. After introduction to the steroid Dyanabol from his personal trainer, Mick starts to feel stronger and more confident. But, along with those feelings come the feelings of anger and dangerous depression that commonly go with steroid use. I don't want to ruin the whole story so I'll just conclude with my feelings. This book, no matter how hard you try, will get to you. You will feel the lows that Mick feels and you will feel the highs. If not, you should check for a pulse =]. I would recommend this to any one who just wanted to read a straight up good book. 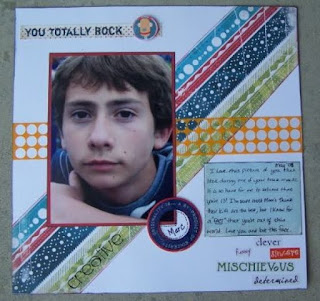 ~written by Marc (that's him on the left)


I would like to thank my son for writing the above review of Gym Candy. He brought this home last week from the high school library and loved it. Somehow I was able to convince him to sit down and post his thoughts on this!! I'm sure that I will have to buy him one of those Brownie Melts at McDonald's!!