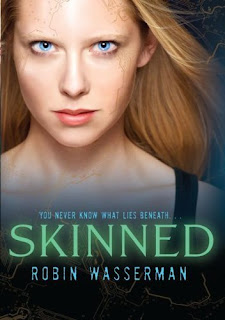 Title and Author of book: Skinned by Robin Wasserman
Fiction or non-fiction: YA Fiction
Genre: Science Fiction sort-of
Where did I get the book: My public Library
Challenges that this fulfilled: None-just trying to get my library pile under control.

Who recommended this book to me? I came upon this book while browsing the YA section at one of my library locations. I thought the cover looked pretty intriguing with all of the tattoo like drawings on the girl's body. After reading the inside cover the story sounded good, so I checked it out!

Lia Kahn was perfect: rich, beautiful, popular -- until the accident that nearly killed her. Now she has been downloaded into a new body that only looks human. Lia will never feel pain again, she will never age, and she can't ever truly die. But she is also rejected by her friends, betrayed by her boyfriend, and alienated from her old life.

Forced to the fringes of society, Lia joins others like her. But they are looked at as freaks. They are hated...and feared. They are everything but human, and according to most people, this is the ultimate crime -- for which they must pay the ultimate price.

What did you like most about this book? I really enjoyed the character Lia and how she progressed throughout the book. She wakes up only to find out that she was in a horrific car accident and basically died. But because her parents have a lot of credit (money) they were able to download her brain, buy her a new artificial body and thus save her "life." But did they really save her life or make this new one unbearable? That's the question that is explored in this book.

What did you like least? I can't really say that there was anything that I didn't enjoy while reading this one. I thought the author made the teens pretty realistic and her future world is pretty amazing. Scary, but amazing. In the future you can just climb into your car, input where you want to go, buckle up and the car drives you to your destination!! So cool!! and think about all the reading you could get done!!

Have you read any other books by this author? I've never read Wasserman but this was book one in a planned series of three books, so I will be continuing on to find out how Lia decides to tackle her new face/body and the way her family and society really feel about her because she isn't HUMAN. She's really just a MACHINE!


If you read and enjoyed The Adoration of Jenna Fox then I know for a fact that you will like this series. This one takes Adoration to another level of what the future world may look like and what science may end up being able to do with the human mind. But once again, I find myself asking the question- Where does the soul reside? In the mind? Where? Can that be downloaded into a computer? Would you want to live inside an artificial body, even if you could basically live forever?

Liv's Book Reviews
direct quote from review:"Being an avid fan of futuristic fiction, I couldn't denounce Skinned just because of it's unoriginality. And there were a few bright points for me. Lia's character was pretty good. She had really relatable thoughts and struggles and worries, so as she grew and found out more about herself and her new life, I felt more connected and drawn to her."


The sequel to SKINNED is finally here!

No one to trust.. 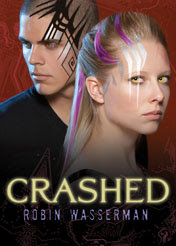 Before the accident, Lia Kahn was happy.

Before the accident, Lia Kahn was loved.

Before, Lia was a lot of things: Normal. Alive. Human.

Lia no longer lives in before.