My pick this week is Mr. Churchill's Secretary. I'm participating in the TLC Book Tour of the second book in Maggie Hope series, Princess Elizabeth's Spy, and TLC and the publisher were kind enough to send the first book. I hate reading out-of-order so it was very nice of them to send me two books!! I'm in love with the cover art and can't wait to get to this story! 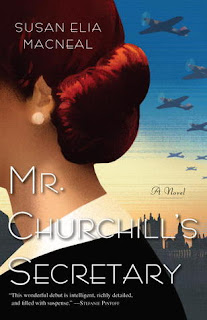 Half an hour before Diana Snyder died, she tidied up her desk in the typists' office of the Cabinet War Rooms.

She looked up at the heavy black hands of the clock on the wall and sighed. There were no windows in the War Rooms, the underground lair used by the Prime Minister's staff, reinforced by concrete slabs and considered to be bombproof. The ceilings were low; signs warned Mind Your Head. The once-white walls had faded to dull yellow, and the floors were covered in worn brown linoleum. Overhead were lines of drainage pipes from the Treasury. While the air was filtered by a special ventilation system, there were still lingering odors of floor wax, chemical toilets, and cigarette smoke.

Would you continue reading this one
based on the opening paragraph?