'The Devil's Star' by Jo Nesbo 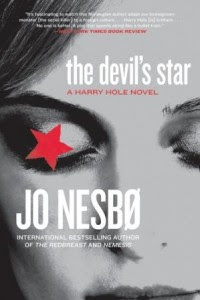 Synopsis from TLC:
In the heat of a sweltering Oslo summer, a young woman is found murdered in her flat-with one of her fingers cut off and a tiny red star-shaped diamond placed under her eyelid. An off-the-rails alcoholic barely holding on to his job, Detective Harry Hole is assigned the case with Tom Waaler, a hated colleague whom Harry believes is responsible for the murder of his partner. When another woman is reported missing five days later, and her severed finger turns up adorned with a red star-shaped diamond ring, Harry fears a serial killer is at work. But Hole’sdetermination to capture a fiend and to expose Waaler’s crimes is leading him into shadowy places where both investigations merge in unexpected ways, forcing him to make difficult decisions about a future he may not live to see.

His finger continued down the column. Leave, leave, sick leave. The Chief Inspector sighed when his finger stopped against the name he had been hoping to avoid.
Harry Hole.
The lone wolf, the drunk, the department's enfant terrible and, apart from Tom Waaler, the best detective on the sixth floor. [p.13]


.....this is the sentence where the reader firsts encounters Harry Hole and how he is perceived by his boss. I was immediately drawn to him for some reason. I like characters that aren't perfect and seem to be fighting demons in their life. It makes them real, gives them flaws, and makes you care about them, because they sound a bit like yourself in ways. This book was my first introduction to the whole Scandinavian crime genre that seems to have really taken off with the introduction of Stieg Larsson's Millenium series.

There were many reasons why I loved this book and couldn't put it down until the very last page. Here's just a few of them:

Recommend? Absolutely with no hesitation. This book kept me on the edge of my seat and I really didn't want it to end. The plus side- there are two Harry Hole's stories prior to The Devil's Star that I will be getting my hands on soon. Must read book for those that love an exciting, bit gritty and gruesome police thriller!!

P.S. While I read this book I used the author as my visual for Harry Hole...no wonder I loved him so much huh? 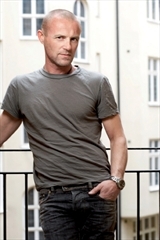 A musician, songwriter, and economist, Jo Nesbø is also one of Europe’s most acclaimed crime writers. Nesbø is the winner of the Glass Key Award, northern Europe’s most prestigious crime-fiction prize, for his first novel featuring Police Detective Harry Hole. The author of The Redbreast and Nemesis, he lives in Oslo.
Find out more about Jo Nesbø on his website. You can also like him on Facebook.


Please stop by these blogs on this tour.

ISBN: 9780061133985
Disclaimer:Thank you to TLC Book Tours for sending me a review copy. I was not compensated for my review. My thoughts on this book were in no way influenced by the author or publicist.They are my personal reflections based solely on MY experience while reading this novel

© 2011, Staci of Life in the Thumb. All Rights Reserved. If you reading this on a site other than, Life in the Thumb or Staci's feed, be aware that this post has been stolen and is used without permission.