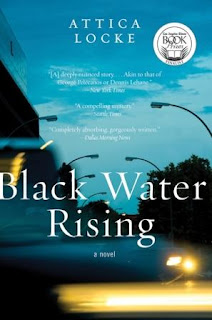 Author: Attica Locke
Pages: 448
Genre: Mystery/Suspense
Source: TLC Book Tours
Synopsis from TLC:
Jay Porter has long since made peace with not living the American Dream. He runs his fledgling law practice out of a dingy Houston strip mall—where his most promising client is a low-rent call girl—and he’s determined to leave the sins of his past buried: the guns, the FBI file, the trial that nearly destroyed him. That is, until the night he saves a woman from drowning and inadvertently opens a Pandora’s box. Her secrets reach into the upper echelons of Houston’s corporate power brokers and ensnare Jay in a murder investigation that could cost him his practice, his family . . . even his life.

My thoughts:
This was a very solid debut book!!! I enjoyed reading this, as it brought to mind the reasons why I used to read Grisham's earlier works. Some have compared this author to Lehane and Turrow, but not having read either one I can only compare the author's writing to Grisham. I love the little guy versus the big bad corporations and corrupt politicians scenario. Another aspect that I enjoyed was the mini-history lesson on civil rights and the grittier, more violent side of the activists. Jay Porter is a character that I came to admire and applaud. He's worked very hard to get to where he's at, trying to leave his past behind him and make a good life for his wife and expectant child. He just happens to be at the wrong place at the wrong time and gets pulled into a web of lies, cover-ups, political intrigue, and finds himself running for his life. Almost everyone that Jay comes into contact with underestimates his intelligence and abilities. The white man does because Jay's black and inferior to them. They have more money, better connections, and power. The black man does because Jay does not have that burning desire to have his voice heard, he doesn't want to take up arms, even if what is happening is unfair, unjust, and wrong. He's been there, done that, and all it did for him was almost land him in prison. Being doubted by both races does however, turn on a flame inside Jay and he realizes that the only person who will take care of Jay, is Jay. Will he let powerful people and the lure of easy money make him turn a blind eye to what is happening, or will he risk it all to do what is right???  This book easily deserves the accolades that have been showered upon it and I truly look forward to future books by Attica Locke!

Thank you to TLC for asking me to be a part of this book tour.
Check out the other tour stops HERE.
Visit Attica Locke at her website, www.atticalocke.com.