Review: The Believers by Zoe Heller 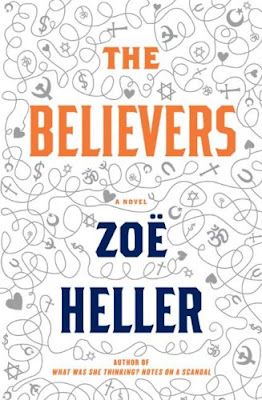 When a stroke fells radical New York lawyer Joel Litvinoff, a secret is revealed that forces Audrey, his wife, to reexamine everything she believed about their forty-year marriage. In the meantime Joel’s children are struggling with their own dilemmas and doubts. Disillusioned revolutionary Rosa has been drawn into the world of Orthodox Judaism. Karla, a devoted—and married—social worker hoping to adopt a child, is falling in love with the owner of a newspaper stand. Lenny, the ne’er-do-well, faces yet another relapse into heroin addiction. In the course of battling their own demons—and one another—the Litvinoffs must reexamine long-held articles of faith and decide what—if anything—they still believe in.

Well, where do I start????? This is my first attempt at reading Heller and overall I liked her way with words. The bigger question is did I like this book? I'll start off by saying that Audrey is not a character that I enjoyed one bit. In fact, I wanted to slap her more than once and maybe even throttle her a few times to top it off! I detested the way that she parented. In my humble opinion she was a rotten mother. All of her children are adults but emotionally......still children. Anything that they wanted to do she bashed them for it. Except for the drug-addicted son, who she treated like was her own personal pet. The Socialist slant of this story just wasn't for me. I'm not a Socialist, nor do I believe in any of their principles or ways of thinking. I frankly thought Joel and Audrey were hypocrites and insensitive to others. On the bright side (yes, there is a bright side!) I did like Karla and Rosa. These two characters were the reason why I continued to read this book. I was involved with them and wanted to know if they decided to live for themselves and to ignore their mother's brutal words. So overall, I wouldn't run out and tell all my friends that they had to read this book, but I'm not sorry that I read it.

Thanks again to TLC for asking me to be a part of this wonderful book tour .


Check out other tour stops here.