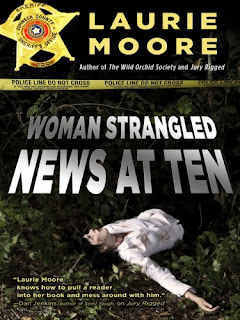 Title and Author of book: Woman Strangled News At Ten by Laurie Moore
Fiction or non-fiction: Adult Fiction
Genre: Mystery
Where did I get the book: My public Library


Who recommended this book to me? I was browsing the new book section and spotted this title on the spine and thought it sounded pretty cool.

Aspen Wicklow, a University of North Texas journalism grad down to her last $75, lucks out and lands a plum job on WBFD-TV's Public Defender in Fort Worth, Tex. Tig Welder, a hotshot gunning for an anchor spot, reminds Investigative Reporter Barbie never to try scooping him, while station manager J. Gordon Pfeiffer warns her never to become part of the story. Following either tip isn't easy after Aspen meets ruggedly handsome Spike Granger, a Johnson County sheriff who's on a rampage about prison overcrowding. Even more alarming is researching a missing person report on Candy Drummond, who pledged at the same sorority as Aspen. Candy later turns up a strangled corpse.


What did you like most about this book? I connected with Aspen Wicklow. I haven't liked a mystery book character as much as I liked her since my first Kinsey Millhone book!! She's a very likeable character and to me she was written in a very realistic manner. I really enjoyed the romantic interest that the author created for Aspen. Aspen gets to really KNOW him and realizes just how much she enjoys being around him. No bed hopping in this book!! I also really liked the story being set in and around the news business. The extra cast of characters were great and really fleshed out so I felt like I got to know each one of them and that they weren't just people sitting on the sidelines.

What did you like least? The mystery was really easy to solve. I pretty much figured out who the bad guy was partway into the story. But the rest of the story made up for this easily!

Have you read any other books by this author? I haven't but after visiting her website I have found out that she's written two other series.


What about the ending? I actually liked the ending because it set it up perfectly for the next book.

Some of the reviews of this book has compared this to Evanovich and I would have to disagree with them. The main character in this book isn't ditzy or always losing her bond skips. The humor in Evanovich's books is a bit better than in this one. There isn't any sexual tension in this series while in Stephanie Plum's life it is never resolved. Aspen's parents are very similar to Granny Mazur in their escapades, but beyond that this series isn't remotely like Evanovich. It did remind me a bit of Kinsey Millhone and J.A. Jance's Joanna Brady Mysteries. So if you enjoy either one of those series/authors then I really do think you would enjoy this new series by Laurie Moore.