Review: In the Land of Cotton by Martha A. Taylor 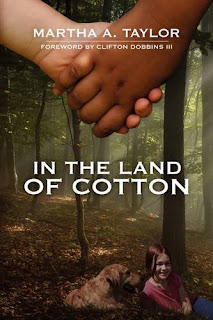 In the Land of Cotton
by Martha A. Taylor
Published 2009 by Outskirts Press
Pages: 256

This is the story of Martha's childhood and teen years living in Memphis during the 1950's and into the 60's. She allows us into a glimpse into her world where we find out that she experiences child molestation from an adult who was supposed to care for her, someone that should've never hurt their own grandchild. Her parents are distant, stingy with their love, and always fighting. As a way to escape these three people, she follows the babysitter, Lucy, who is a black woman, home one day. She realizes that there is a world unknown to others deep in the woods behind her sub-division. She spends much of her summers with Lucy's extended family and feels like a loved family member. During her time there she meets and falls in love with Silas. They both know that their feelings have to be kept secret,but after Silas is sent to Vietnam, they realize that they MUST be together no matter what. Her story unfolds as the Civil Rights movement is underway and her relationship with Silas is one that is fraught with danger. There is so much to learn from this wonderful book. I took more from Martha's story than I ever did in history class. She made the events come alive and because she lived during that time, her story made more of an impact on me. Not only that, but a lot of what was happening affected her and Silas's relationship. It wasn't until the late 1960's when the government finally removed the laws that had prevented blacks and whites from marrying. This book was well worth the time I spent reading it. I walked away with a much broader knowledge of the discrimination and hatred endured by our fellow Americans and I came to love Martha, Silas, Lucy, Mammy Grace and all of the other Boyd family members. I absolutely recommend this book to anyone wanting to read about an innocent and true love developing against the backdrop of racism, hatred and fear of other races, and America at war in Vietnam.

Labels: Book Review, Books Read in 2009, In the Land of Cotton