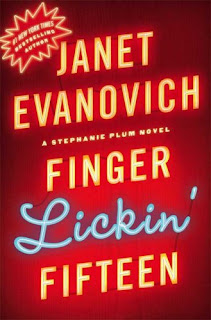 Finger Lickin' Fifteen
by Janet Evanovich
Published: 2009
Genre: Adult Escapism
Where did I get this book: Local library

Before you read any of the Stephanie Plum books you must first suspend all belief that any of this could happen, and then just jump in with both feet. I actually enjoyed this one more than a few others I've read in this series. Grandma is still her quirky ,crazy self, and Lula is forever eating and being sassy. There aren't any real developments going on here, just another day in the life of Stephanie Plum. But, I have to be honest and say that how much longer can Evanovich write this series without Plum making a choice between Joe and Ranger???? I'm tired of her teasing Ranger and then jumping into the sack with Joe at the end!! If something doesn't happen in the next.....say, 5 books....I may have to stop reading them!!

Here's what would happen if I wrote the book:

I followed him to the door and watched him take his keys from the sideboard and pocket them. He pushed me to the wall, leaned in to me, and kissed me. "Later," he said, his lips brushing against mine. And he left. p. 65 (she lets him leave)

but if I wrote it

"No, Ranger don't go!!" Stephanie yelled. "I can't wait until later, later never comes." Ranger turns around grabs Stephanie, picks her up, and carries her back to bed.

Next scenario from the book:

He wrapped an arm around me and kissed me just above my ear. "There's something wrong with this picture," Ranger said. "You're in my bed a lot, but never with me." (he leaves..AGAIN!) p.116

From my Ranger obsessed thoughts:
"Ranger, I want to change that right now." Stephanie looked at him with tears in her eyes. "It's been a hard choice to make, but I love you, not Joe." Tugging him towards her, she whispers, "I never want to be in your bed without you."

I admit it, I have a slight crush on Ranger. But give a girl a break here!! Can't Ranger win this one? Who's with me? Who's for Joe? Who wants to see her make a choice? Who thinks that if she does it will ruin the books? Tell me!!!!!