TLC Book Review of : A World I Never Made 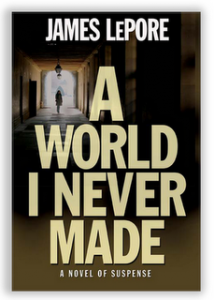 Synopsis from Goodreads:
A World I Never Made is the story of Megan Nolan, a beautiful and brilliant but cynical young writer who fakes her suicide in order to escape from an equally handsome and brilliant Saudi lover who she discovers is a terrorist mastermind. When her father, Pat, a recently retired Connecticut contractor, estranged from his daughter for many years, discovers the ploy, he commences, with the help of a lovely but oddly sad French detective named Catherine Lawrence, on a search that leads him inexorably into the dark world of terrorism, espionage and counter-espionage where he ultimately comes face to face with evil, with his lost daughter and with himself.

Dad,
I don't owe you or anybody an explanation, but I think you'll appreciate the irony of a suicide note coming from a person who has abhorred tradition all of her life.

This is the first line of the book (published version may be different from ARC), which totally pulled me into the story and had my interest until I finished. The book takes off with lightening speed and transitions between the years 2003 and 2004. The author weaves the story using Megan's past and her father's present to develop this intriguing and thought-provoking plot. I found myself at once captivated by Pat, the father. He seemed remorseful for his past years of neglecting Megan and has to come to grips with the fact that she has now taken her own life....or has she? This story puts you, the reader, right into the middle of the hotbed of terrorism, sleeper cells in France, Germany and other countries. You learn about the Muslim faith and how women are perceived in most Middle Eastern countries. You also realize early on that Megan is playing with fire when she sets out to seduce Abdel Lahani, a Saudi businessman. She has certainly bitten off more than she can chew. And while reading her story, I honestly grew to despise her character!!!! Which leads me to one of the questions I asked the author, James LePore.

Did I plan on making Megan Nolan a hard character to like.?

I did. I believe good dramatic fiction must have characters we root for as well as characters we root against. I also believe that characters, when confronted with moral choices, must decide how they will react. Sometimes a “good” character will react badly and a “bad” character will react heroically. I believe this makes for good reading. The road to corruption is and easy one. It is the road to redemption that is hard. I hope that readers will see that Megan tried to redeem herself, to atone by her heroism for the mistakes she made and the hurt she inflicted on others in her past.

As I continued on reading this book I realized that I honestly know next to nothing about terrorism and how it is viewed in most Muslim countries. This is one of the great things that I took away from this book....knowledge of other religions, beliefs, and cultures that I am not exposed to on a daily basis. As I thought about all of the differently held belief systems in our world it led me to ask James this question.

I believe that the fight between good and evil is real. In our time, that fight was waged first against Nazi Germany and Imperialist Japan and then Soviet Russia, evil entities all, all confronted head on and defeated. I believe that Muslim terrorists, or more accurately terrorists who use Islam to justify their killing of innocents, are the new face of evil on the planet. If you Google “Islamic Terrorism” you will find thousands and thousands of terrorist acts by Muslim fanatics around the world over the last 35 years, all done in an effort to impose their way of life on the rest of the world. In that way of life there is no freedom of speech or religion, and women are basically chattel. To use these people as the bad guys in a novel seems logical to me. To pretend, for politically correct reasons, that Islamic terrorism is not our enemy, will, I believe, lead to more, not less. killing of innocent people.

I normally do not read suspense books based on political happenings, but I've changed my tune after reading A World I Never Made. The author added all the right elements to this story to make it interesting to me; mystery, religion, foreign countries, a love affair, flawed characters, differing view points, redemption and in the end closure. This is James LePore first novel and I believe his future is very bright!! I look forward to reading his second book, The Story Plant, which is scheduled to be published in the spring of 2010.

I would like to thank James LePore for taking time out of his day to respond to my questions and for allowing himself to be open to my thoughts and feelings on his first novel. Many thanks also go out to Lisa of Books on the Brain and to TLC Book Tours for asking me to participate in this tour of A World I Never Made. 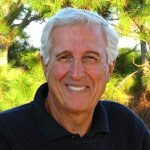 Please make sure that you

visit the rest of the blogs featured on this tour

by clicking on the TLC Logo!!