A Reliable Wife- My Thoughts 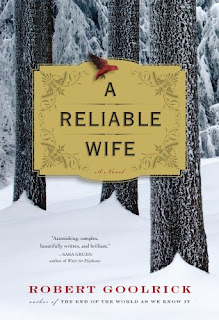 From the inside jacket: A condensed version

For Ralph Truitt, the wealthy businessman who had advertised for "a reliable wife," this was to be a new beginning. Years of solitude, denial, and remorse would be erased, and Catherine Land, whoever she might be, would be the vessel of his desires, the keeper of his secrets, the means to recover what was lost. That was his plan. This is a story of two people, each plagued by a heart filled with anger and guilt, each with a destiny in mind. But neither anticipates what develops between them........

I read this book during the early morning hours last Saturda . Once I opened the pages I was lost in the cold, white, endless winter world of Wisconsin. The beginning seems to be slow and very wordy, but after you get past that point you realize that the author wants you to feel the pain of the cold, and to envision how months of winter can drive people to commit heinous acts against those that they love. I was totally engrossed in the lives of Ralph and Catherine. I couldn't put the book down until I had finished it, which is a pretty good sign that I loved it. This story is one of mystery, love, death, murder, and ultimately human connections. But throughout the book there is a subtle vibration of menace. For me, this story at times, made me recall how I felt while reading "The Tell-Tale Heart." Because you know something bad happened or will happen, it's right there for you to see, yet you still feel that tension of impending doom.

She might wound him, she might lie to him, and still he would do anything to hear one word of kindness from her lips, to feel his flesh touch her flesh without humiliation. He was willing to take the chance. And all this because she had stepped from the train with a small scarlet bird in a cage, and she was coming home to him, bringing a fluttering life. He was at last waiting for someone whose name was known to him. People saw her come home to him, people in his town. She smiled at him, and he knew then that he would die for her.

I wish I would've read this book during a blizzard, for then I would have been able to totally immerse myself into the story, but even though I read it during a spring day, I still felt the harshness and bleakness of the Wisconsin landscape. This is an author that I would read again without hesitation and one that I totally recommend to my friends!!! You won't be disappointed!!

Other reviews:
Devourer of Books
The Booklady's Blog

If you've reviewed A Reliable Wife let me know so that I can add your link!!