Sonata for Miriam- my thoughts and a book giveaway! 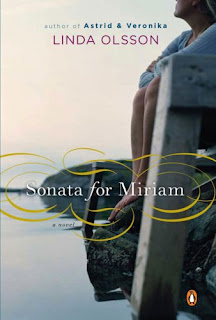 From Penguin Books:
Once again Linda Olsson captures poignantly the pain of loss and the universal longing to uncover the past. On the day of his only daughter's death, composer Adam Anker visits a War Memorial Museum in New Zealand, and discovers a photograph of a man who shares Adam's name, or at least the name he was born with: Adam Lipski. After a year spent grieving the loss of his daughter, Adam embarks on a journey. His search takes him to Krakow, Poland, where he meets Moishe Spiewak, an elderly Jewish man who knew Adam Lipski and his family well, and who was one of the last people to see him alive. As Moishe and Adam's friendship deepens, Adam begiins to understand what happened to his family. But there is one more person he must see before he can begin life anew: the mother of his daughter and the love of his life, to whom he hasn't spoken in twenty years.


This is my first experience with Linda Olsson and I'm so thankful that I have found her. Her writing is exquisite and invokes such emotion, that I find it hard to put into words the feelings I experienced while reading this novel. Her descriptions of the places and people make you feel as if you are there along side Adam. I felt his pain accutely in so many parts of this book. The loss of his daughter is always moving like a whisper in the background of the story. Everything that he is and does is because of this love that he experienced while raising her and then losing her. With that loss, he has to find a way to live again. Living is something that he finds extremely hard to do, but he realizes that he did not give his daughter everything that he could've...he never gave her the mother that she needed to know. He himself never got to know his real father, so he decides to explore the clues that he uncovered in the War Memorial Museum. As he uncovers his family's history you get to really know, understand, and to see how his past has influenced his life and the choices he has made along the way. With the help of family he never knew about and newly found friends, he eventually is able to reconcile his past so that he can embrace his future. Olsson's writing is spare and eloquent. She has such a masterful command of language and I found myself falling in love with her words.

"I never knew how Jan's father had discovered that our time was running out. He must have made some elaborate preparations after he heard about the imminent deportation of Jews. But he never discussed it with me--not then, not later. When I arrived at their apartment, they were ready to go, and we left the same afternoon. I was to travel with them to London, officially as Jan's tutor. And that was how I ended up as the only surviving member of my family. I survived. But I lost my life.
p.133

I lay down on the bed clasping the pictures and buried my face in the pillow in a vain attempt at silencing my sobs. But it was as if all my life's accumulated grief had finally found an outlet and was allowed to take its course. I screamed, I cried, until the grief became bearable. Afterward I lay staring into the air above the bed.
And eventually I fell into a dreamless sleep.

I could list a thousand such passages that moved me but I want you, the reader, to experience them for yourself. If you haven't read Linda Olsson then I strongly recommend this book to you. I believe that it will become a favorite read for 2009, just like it has for me!

For more information about Linda Olsson and her previous book, Astrid & Veronkia please visit her here.


I want to thank Gabrielle at Penguin Books for giving me the opportunity to read this wonderful story!

Would you like to win my copy of this book?

I have one paperback copy of Sonata For Miriam by Linda Olsson to share with one of my readers courtesy of Penguin Group. This giveaway is open to US and Canadian residents only (no PO boxes). Here are the rules:

Check out these other great reviews: