The Edge of Winter/Audio Book- My thoughts 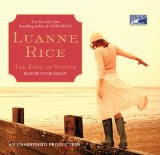 The Edge of Winter by Luanne Rice
Audio CD

Neve Halloran and her daughter have shared a fierce love for the austere beauty of Rhode Island’s South County ever since Neve guided Mickey’s first baby steps along the sandy shore. Now, with Mickey a teenager and Neve’s last hope for happiness with her daughter’s loving but unstable father gone, both will struggle to make a new life together amid the windswept landscape that sustains them.


I have only listened to books on tape a few times. I enjoyed it but have not made it a regular feature within my reading habits. This year I've decided that I would try to get outside my little box and try new things. One of those is to add more audio books to the line-up. Well, this one just did not cut it for me. I almost gave up on it.....several times....but I don't want to be known as a quitter, so I let those cd's run their course in my car stereo. I've never read any books by Luanne Rice so I didn't know what to expect in regards to the story. Honestly, I picked this book because I liked the cover...LOL!!! The story itself was alright. In fact, if I had been reading it myself I'm sure that I wouldn't have found it quite as cheesy as I did but adding the narrator's annoying voice to the mix just about put me over the edge. I found myself constantly rolling my eyes at certain lines, and almost all of the time when the narrator changed her voice from old man, to middle-aged man, to teen boy. And if that was not enough, every time the narrator said, "he said." "she said."(keep repeating these lines to yourself several times....) my son and I looked at each other and we both were like...what the heck? How many times can the author keep using, "he said." "she said."?????? I guess when I'm reading the words it doesn't seem so repetitive, but when you're listening to it.....I wanted to SCREAM, stop the car, eject the cd and throw it out the window!! But I didn't let this first lackluster experience keep me from the audio section at my library. Last Saturday I walked out with The Whistling Season by Ivan Doig and so far I'm enjoying it. Could it be because the narrator is a man who does NOT change his voice constantly? I'll let you know!