In the Pleasure Groove(audio)- More than Six Sentences Bookish Thoughts


What In the Pleasure Groove: Love, Death, and Duran Duran is about:
In his frank, compelling autobiography, John recounts the highs - hanging out with icons like Bowie, Warhol and even James Bond; dating Vogue models and driving fast cars - all the while playing hard with the band he loved. But there were tough battles ahead - troubles that brought him to the brink of self-destruction - before turning his life around.

My heart broke a little bit when I realized that I was quickly coming to the end of this audio book. John became a treasured friend, someone who I quickly became accustomed spending my early morning driving time with, and also someone who I daydreamed about since the early 80's from the first moment I listened to Planet Earth!! I loved every single moment that I spent listening to John as he told his story of a young lad growing up in Birmingham, being a teen in the 70's music scene, meeting Nick Rhodes, and becoming a driving force behind Duran Duran. What I LOVED most was how authentic John was in telling his story. He didn't sugarcoat any of his mistakes, his drug and alcohol abuse, and being a lousy boyfriend. He was also such a true gentlemen by NOT dishing the dirt on his fellow bandmates and friends, and for that I respect him. 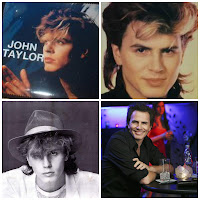 Recommend? If you were a Duranie then YES, of course you MUST read this. I was in love with John Taylor from the first moment I saw him. I knew one day that my last name would be Taylor...had to be,  because I was so going to marry this man!! (Got the same last name just a different guy!!) I saved my money so that I could buy the teen mags that always had some type of poster of Duran Duran or one of the guys. My bedroom walls were one big Duran Duran collage with John being the main focus. What I learned from this audio was that all those years mooning over a fantasy has led me to now realize that John Taylor is so very human, down-to-earth,  and truly someone I would be honored to call friend!

* Warning:  Listening to this audio book can lead to hours spent on YouTube watching Duran Duran videos, interviews, and singing at the top of your lungs....Her name is Rio and she dances on the sand.....

Source: Audible.com
Narrator: John Taylor (I admit to pretending that he was sitting beside me in the car telling his story)
Length: 7 hours and 55 minutes

Six Sentence Bookish Thoughts #97© 2013, Staci of Life in the Thumb. All Rights Reserved. If you reading this on a site other than, Life in the Thumb or Staci's feed, be aware that this post has been stolen and is used without permission.