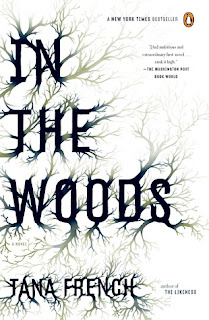 What In the Woods is about:
As dusk approaches a small Dublin suburb in the summer of 1984, mothers begin to call their children home. But on this warm evening, three children do not return from the dark and silent woods. When the police arrive, they find only one of the children gripping a tree trunk in terror, wearing blood-filled sneakers, and unable to recall a single detail of the previous hours.  Twenty years later, the found boy, Rob Ryan, is a detective on the Dublin Murder Squad and keeps his past a secret. But when a twelve-year-old girl is found murdered in the same woods, he and Detective Cassie Maddox—his partner and closest friend—find themselves investigating a case chillingly similar to the previous unsolved mystery. Now, with only snippets of long-buried memories to guide him, Ryan has the chance to uncover both the mystery of the case before him and that of his own shadowy past.

After reading Broken Harbor I knew that I needed, absolutely needed to read all of French's book from the beginning. From the very first page I was drawn into Rob and Cassie's world. Dublin has been a city that has captured my attention and is one that I must visit before I die, but I do hope that I never ever experience the ugly, dirty, seedy side that encompasses this book. French is masterful and clever with her writing and left me wanting more, so much more. I tried not to get all flustered and angry at the ending of this book. I've been told that she has a way of dangling her readers over the edge of a big cliff called NO REAL ANSWERS and left wondering if anyone will save them!!

Recommend? Yes. Her writing is solid and her characterization is rich and complete. I conjured up images of the scenes and the people who walked the streets. Even though she has the tendency of not wrapping up everything nice and neat, I have found that I am becoming a bit fond of that. I must be off my rocker....but in a good way!! On to The Likeness before I ring out 2012!

Six Sentence Bookish Thoughts #56
© 2012, Staci of Life in the Thumb. All Rights Reserved. If you reading this on a site other than, Life in the Thumb or Staci's feed, be aware that this post has been stolen and is used without permission.