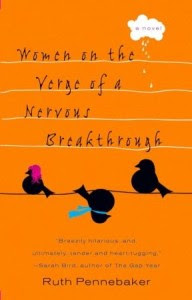 
Joanie’s ex-husband is having a baby with his new girlfriend. Joanie won’t be having more babies, since she’s decided never to have sex again. But she still has her teenaged daughter Caroline to care for. And thanks to the recession, her elderly mother Ivy as well. Her daughter can’t seem to exist without texting, and her mother brags about “goggling,”-while Joanie, back in the workforce, is still trying to figure out her office computer. And how to fend off the advances of her coworker Bruce. Joanie, Caroline, and Ivy are stuck under the same roof, and it isn’t easy. But sometimes they surprise each other-and themselves. And through their differences they learn that it is possible to undo the mistakes of the past.

1.) Reasons you chose this book

I take a lot of time to read the synopsis of the books that I'm offered to read for TLC and thought this one would be a book that I would enjoy. I'm always interested in family dynamics and having three women from different generations under one roof could prove to be a fun read.

2.) Reasons you liked or disliked this book


Hospitable Pursuits: "Ms. Pennebaker has crafted a uproarious novel about characters who are amazingly recognizable."

Love to Read for Fun- "I enjoyed reading Women on the Verge. The tone is light, funny and sometimes snarky. " Ruth Pennebaker writes about women’s issues, families, marriage, aging, politics, and anything else that interests her at her popular The Fabulous Geezersisters blog.
She’s also the Urban Cowgirl columnist at the Texas Observer, an occasional commentator at KUT public radio in Austin, and the author of three acclaimed young adult novels. Her work has appeared in nationwide publications, including The New York Times, McCall’s, Redbook and other newspapers and magazines. She lives in Austin with her mad scientist husband, their cat, Lefty, and the accumulation of stuff from their two emerging-adult children.

Published: January 4, 2011
Publisher:  Berkley Trade
Pages:309
Genre: Contemporary Women's Fiction
ISBN: 9780981956886
Disclaimer:Thank you to Ruth Pennebaker for sending me a review copy. I was not compensated for my review. My thoughts on this book were in no way influenced by the author or publicist.They are my personal reflections based solely on MY experience while reading this novel
© 2011, Staci of Life in the Thumb. All Rights Reserved. If you reading this on a site other than, Life in the Thumb or Staci's feed, be aware that this post has been stolen and is used without permission.