Review: The Sweet By and By 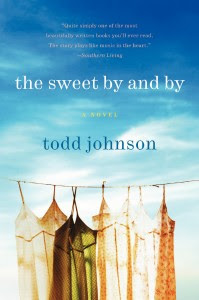 Title: The Sweet By and By
Author: Todd Johnson
Pages: 514
Genre: Southern Fiction
Source: TLC Book Tours
Synopsis: Among the longleaf pines and family farms of eastern North Carolina, days seem to pass without incident for Margaret Clayton and Bernice Stokes until they discover each other in a friendship that will take them on the most important journey of their lives. Margaret, droll and whip smart, has a will of iron that never fails her even when her body does, while Bernice, an avid country-music fan, is rarely lucid. Irreverent and brazen at every turn, they make a formidable pair at the home where they live, breaking all the rules and ultimately changing the lives of those around them. Lorraine, their churchgoing, God-questioning nurse, both protects and provokes them while they are under her watchful eye, as her daughter, April, bright and ambitious, determinedly makes her way through medical school. Rounding out the group of unlikely and often outrageous friends is Rhonda, the Bud-swilling beautician who does the ladies’ hair on her day off and whose sassy talk hides a vulnerable heart, one that finally opens to love.


My Thoughts: I have to admit that when I first started to read this book I was a bit confused as to the structure and what exactly was going on with the story. After the first couple of chapters I  realized that this was a version of good ol' Southern storytelling. There isn't really a plot, per se...but instead a glimpse into the lives of five women whose paths have crossed because of a nursing home. Two women work in the nursing home and two women live in the nursing home. Each woman gets the opportunity to tell their story in alternating chapters. I found the cadence of their speech to be pleasing and soothing. I couldn't help but compare their way of talking to my own Grandpa Bill Brown's. When he got into story mode about growing up in Kentucky, we would all stop, drop, and listen. What I really took away from this book is that no matter your age or situation in life, you still have something to contribute. I learned this lesson firsthand when I worked in a nursing home during my teen years. I worked as fast as I could so that I could get down to the "smoking room" to visit with two of my favorite residents. Their stories were great and gave me a glimpse as to who they were as young adults.  Directions for reading: grab a comfortable rocker on the front porch, pour a glass of lemonade, put up a do not disturb sign and immerse yourself in the sweet goodness of southern writing.

Thank you to TLC for asking me to be a part of this book tour.
Check out the other tour stops HERE


TODD JOHNSON was born and raised in North Carolina. Following a career as a teacher and studio singer in New York City, he received a Tony Award nomination as a producer of The Color Purple on Broadway.  He studied history at UNC–Chapel Hill and holds a master’s degree from Yale Divinity School. He lives in Connecticut. This is his first novel.
If The Sweet By and By prompts you to share a personal story, please write to Todd@ToddJohnsonBooks.com.
You can find out more about Todd Johnson on his website. Make sure you also check out his blog, as well as The Sweet By and By on Facebook!
Todd is also on a Southern Tour right now, so please click here to see if he's in your neck of the woods!