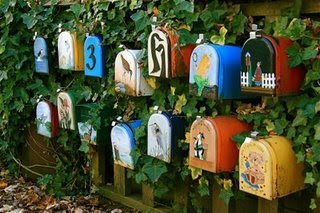 Mailbox Monday
is hosted by Marcia at The Printed Page.
We share what books that we found in our mailboxes last week.
I have my sister-in-law Heather to thank for all the books that arrived via the mail for me this past week. Not only did she make me that wonderful quilt but she scoured my HUGE to-read list on Goodreads and picked up these following books for me from Bookmooch:

The Day I Ate Whatever I Wanted : And Other Acts of Small Liberations
by Elizabeth Berg
--can't wait to read this one and follow some of the advice in it. Added bonus it is an autographed copy!!!

The Perfect Summer by Luanne Rice
-Heather really liked this one so she thought I needed to read it because I wasn't that crazy about Edge of Winter. I blame part of it on the audio book and the narrator. I'm always willing to give authors another chance!!

The Second Virginity of Suzy Green by Sara Hantz
-not sure where I heard about this but the story sounds like a good read!

Annie Freeman's Fabulous Traveling Funeral by Kris Radish
--Some ladies over at a scrapbooking site read this book and liked it so I had marked it to read.

The Kite Runner by Khalid Hosseini
--I know, I know...I'm really behind on reading this great book!!!

that's only half of your belayed
birthday present!

so I wanted to publicly acknowledge the other half of my belayed (Alex's term, not mine) presents. Here they are Alex...are you happy now?


What showed up in your mailbox last week?